What’s in a doggone meeting?

Posted by binaltro on May 28, 2013
Posted in: Uncategorized. Tagged: Ray Harryhausen, Science Fiction. Leave a comment 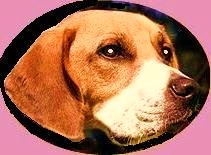 Another question has come up, one I would like to address this time around. Some of you have asked how it was that I happened to come across Amos on that isolated beach in the first place. Was it pure chance or did something draw me to that particular spot at that specific time? This is something I have thought about, often asking myself that same question.

I have discussed it with Silag and he suggested that perhaps the forces in play to transport Amos to my world could have registered in my senses at a level beneath conscious awareness. Both Kerna and Arnal also agree that this is a distinct possibility. I have gone over that time interval in my memory, trying to remember anything out of the ordinary and I do not recall seeing, hearing, smelling or otherwise sensing unusual just prior to finding Amos. I know that happenings beneath my awareness do occur however, and I would not find it hard to believe that such events could cause responses that might seem unintentional. Maybe Amos’ violent entry into my world emitted energies that I unknowingly detected, signals that drew me to the beach nearest to their origin. I cannot say with certainty that this is what actually happened on that fateful early morning. I say only that it is possible.

Questions like this can are often discussed and speculated upon, delving into areas of philosophy and belief structure. Personally, I prefer to take things as they come. It matters very little to me WHY I was at that place at that time. It is important only that I WAS, both for me and my friend Amos. However it came about, I think our meeting and the friendship that came of it has greatly enriched both of our lives and that is what really matters.

That is enough for now. If you have not already done so, please read one of the “Man’s Best Friend” series books. I think you will enjoy it. 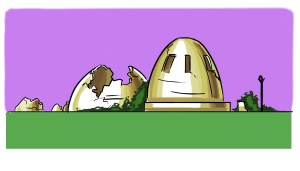 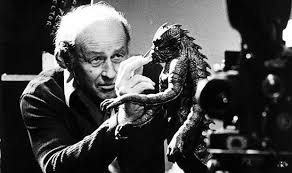 The late Ray Harryhausen made some of the best science fiction films ever made in my opinion. His artistry was in bringing fantastic creatures to life (an artistry that has few peers). I would like to single out three great films from his career: The Beast From 20,000 Fathoms, 7th Voyage of Sinbad, and Jason and the Argonauts. This is where dynamation, Ray’s technique for stop motion cinematography using articulated, intricately designed model/machines, became a special effects art form used throughout the motion picture industry. Right up to the classic 1981 Clash of the Titans, dynamation was used by a host of special effects wizards, but Harryhausen was the top master. Watch Clash and you will see dynamation at its pinnacle.

I began watching science fiction in the late 1950s where I discovered to my great joy the Friday night double feature and the soon to be added Saturday Afternoon Science Fiction/Horror Matinee! My parents were indulgent enough to let me take over the TV room and watch all the available science fiction and horror movies – actually this was a ploy to have some alone time from the kid. It was 1958 when I watched The Beast From 20,000 Fathoms. It began a lifelong love of dinosaurs and science fiction.

Released in 1953, Beast was during the time atomic energy became the bogyman unleashing a swarm of deadly monsters, (some still around today). Nuclear detonation testing in some remote Artic Circle location – we’d test nukes anywhere – thaws out prehistoric creature; The Rhedosaurus! The reptile first surfaces in the artic and then makes its way down the Eastern Seaboard. It sinks a couple of fishing vessels, tears down a lighthouse (for an alternative to that scene read Ray Bradbury’s short story The Fog Horn), runs amok in Manhattan, terrorizes the populace (180 dead, 1500 injured, $300 million damages – newspaper headlines screamed), leaks radioactive blood all over the place and is finally killed in a grenade launching scene set on a roller coaster. In short, all the trappings of a first rate action film. The special effects for that film hold up today. I would love to see a pristine copy of the film in a theater and relive my youth spent at the afternoon SciFi/Horror double feature with a serial episode (Rocket Man) thrown in. Ah, the good ole days.

In 1958 The 7th Voyage of Sinbad was released to excellent reviews and breath taking special effects. The stop action technique was being marketed as  DynaMation (later versions were coined Dynarama)! I’m not sure how long this name hung on but the effects of Harryhausen’s dynamation were superb. The Cyclops definitely steals the show. 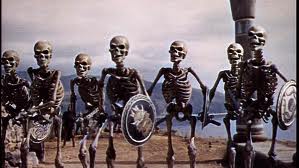 In 1963 Jason and the Argonauts hit the theaters and was the first film of Harryhausen’s I would see as a first run movie in a great theater, the Cinerama in Seattle. It was spectacular. From the giant bronze statue of Talos coming alive to three men fighting seven animated skeletons, Jason and the Argonauts delivered a grade one theater experience.

All three of these films are on my Top 20 Science Fiction Films of All Times. In subsequent blogs I’ll print the list. As a matter of fact, feel free to list your own Top 20 as a reply to our blog. In future columns I will discuss more of Mr. Harryhausen’s work and his genius. There are so many great ones. I just might have to revise my list Top 20 list again. Until next time.

Some of you have asked about the similarity of my species, the Nacker, to the “dogs” of your world. There is a physical resemblance to a type of earthly dog called the “Harrier,” though I frankly do not see it quite as much as Amos, Ryan and Alex insist. The “dogs” of earth are actually much more like the unenhanced Nackers of my world, creatures with some intelligence to be sure, but extremely limited when compared to me, Nix and the others in the Nacker settlement. This does not even address our telepathic ability, another attribute that sets us above and apart. These observations are not intended to convey a negative view of your “dogs,” but rather to define the differences. After all, my species did not always possess these qualities and any arrogance on my part would be quite inappropriate.

I had occasion to meet a few “dogs” during my brief stay in your world. I can tell you that while not of superior intellect, they were sensitive creatures, some of whom even displayed telepathic aptitude, albeit at a rudimentary level. I am confident that if selected individuals were to participate in an enhancement program similar to that of my ancestors, their progeny would achieve great things in the future.

As to where we Nackers originated, I can only tell you what I have learned from the sketchy records in the Binaltro Archive. It is thought that we came to Ronala with the ancestral space-faring race that is presumed to have colonized our planet in the distant past. Our notable affinity for the Ronalan Citizens, as well as the humans who so closely resemble them, would seem to support that theory. Of course until sufficient evidence either confirms or refutes this idea, it remains in the realm of conjecture.

That is enough for this installment. Until my next post, enjoy the “Man’s Best Friend” series. I can recommend them from personal experience.

I was talking to my daughter the other evening and the discussion eventually turned to gaming. To my surprise she told me of a group she gets together with periodically to play Shadowrun. I was flabbergasted to find that pencil, paper, charts and dice RPG gaming is still popular. And, Shadowrun is in its 4th edition. I played it in its first edition. This started me thinking about a game that I purchased back in the 1980s called Aftermath. 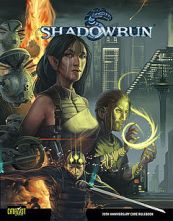 According to Wikipedia  “ Aftermath! is a role-playing game created by Paul Hume & Robert Charette which was published in 1981 by Fantasy Games Unlimited.

“It is set in a post-apocalyptic world where the characters typically have to fight for food, water, basic supplies and shelter. The rules are reasonably complex and include many flow charts and tables to enable the Games Master to simulate the world. This leads to a very immersive gaming experience. However, it does require a good knowledge of the rules.

“The nature of the Apocalypse is up to the Games Master but it is reminiscent of the Mad Max films. There is even an expansion (Aftermath! Magic!) to play in a universe dominated by dragons in the style of the film Reign of Fire.”

This description only touches very lightly on what that game was like. The levels of game play were highly detailed and enormously complex. However, a skilled Game Master could make this game fly causing the action to be swift, exciting and, under the right conditions, pulse pounding. Any post-apocalyptic dystopian loving fan would find this game entertaining and absorbing. Once past the steep learning curve the players find a believable and scary world to compete in.

I sold most of my Aftermath! and Shadowrun materials years ago. along with most of my AD&D tomes. Now days I mostly game on the computer either in a stand-alone environment or on an MMO platform. But occasionally I look back nostalgically on the “old school” RPG gaming and find that I miss that human interaction that occurs when a group of serious gamers get together and pit their mettle against a competent Game Master. I find it heartening in many ways that a younger generation is still enjoying this type of gaming and hope they in turn pass the skill on to yet another generation.

Now, if Dream Park would only become a reality!

Books for the Whole Family

my comic, Life With Bear

Science Fiction and Other Suspect Ruminations
What's Your Tag?